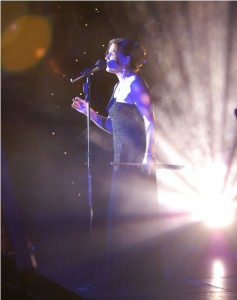 The other day I got an email from a music student asking about the pros and cons of working as a cruise ship singer. I thought it was a great question which warranted more than a brief reply, so I decided it would make for a good blog topic.

I have done a variety of different kinds of singing jobs onboard cruise ships over the years, and they all presented their own highlights and challenges. The job of ‘a cruise ship singer’ can vary from ship to ship and contract to contract, in terms of job conditions, type of performance, and length of contract.

For instance, one of my first contracts was as a production cast member, singing in the ‘in-house’ shows onboard ship. I auditioned in London, got the job, and from then on things happened very quickly. I had to arrange my visa then fly straight to the US to attend show rehearsals for several weeks before joining the ship for a six month contract.

As well as performing in the shows each night there were other ‘entertainment host’ type duties I was expected to fulfil onboard ship, such as compering events, organising safety drills and socialising with passengers.

I have also worked as a ‘resident band’ singer on many ships. This job is also generally a long contract of around 6 months, and can involve singing for up to 6 hours a day, for 6 or 7 days per week, so it can be quite hard work as a singer. My vocal chords certainly became very strong after a while!

Performances can be in different parts of the ship; for example lounge bars, the theatre, or even out on deck. Resident bands are not expected to perform ‘entertainment host’ type duties, but would be required to participate in health and safety procedures, such as boat drills and other regular training sessions. Also, performances are not necessarily confined to evening; often the band are required to play during the afternoon. Add regular band rehearsals to this and you may be disappointed if you expect to have every day free for sunning yourself out on deck!

Perhaps the most sought-after Cruise Ship singing job is that of a ‘headline act’ or ‘visiting cabaret’. These types of contracts are usually very short-term and can last anywhere between one night and a couple of weeks, during which one or two shows will be performed in the main theatre. No other duties will usually be required, and the singer will normally have passenger status (which means a passenger cabin, no restrictions in terms of using bars and restaurants, and no safety drill responsibilities).

The money and conditions for this type of job are usually much better than other types of contract, especially considering that you are only expected to perform a few shows and are free for the rest of the time to enjoy the ship – however it can be quite difficult to secure a contract as a visiting cabaret, unless you are already well-known on the circuit.

There is a downside however, as a lot of travelling is involved in these short-term contracts. As a solo performer it can feel quite lonely flying back and forth to various ports to meet the ships, and staying in hotels alone en-route. ‘Living out of a suitcase’ may not be everybody’s cup of tea. An organised and confident personality is a bonus when dealing with delayed flights, lost luggage and other stressful travel situations. Again, it all depends on your own outlook – a lot of singers would relish the thought of being paid to travel to so many different places.

No matter what your job, any work onboard ship calls for quite an outgoing personality, as you are expected to be friendly and polite to passengers at all times. Privacy can be an issue, as when you are at sea there is ‘nowhere to hide’ – plus you often have to share a cabin with another performer, unless you are a visiting cabaret. In terms of food and general living conditions, it varies greatly from ship to ship – it’s a good idea to study your contract carefully before signing to check out what’s in store!

Weighing up all the good and bad points, I must admit that I certainly don’t regret any of my time onboard cruise ships – it has been a fantastic way to travel the world, meet some great people, gain unique life experience, and see some places I never would have travelled to otherwise.