Whether you were a teenager in the fifties, or you simply wish you had been, top class vintage style singer Lisa Martin will give you the chance to re-live an era that is constantly re-created with much love and nostalgia, from classic films such as Grease, to popular TV shows like Happy Days.

With songs from Connie Francis, Doris Day, Elvis Presley, Brenda Lee and many more, this show will have you jiving the night away! 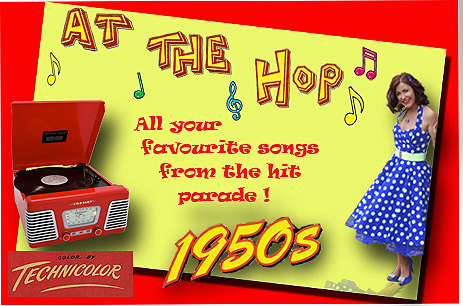 ‘At the Hop’ 1950s tribute show can be combined with any of Lisa Martin’s other shows for a complete night of entertainment – for instance a typical night could include an early evening retro-style cabaret show, and a 1950s party set later on in the night, with some 1960s classics thrown in for good measure!

If you wish to cater for all tastes in music that’s no problem – Lisa can also include a set of modern pop music for the younger members of the audience – or simply for those who are young at heart.

Themed background music is also provided during breaks to set the mood.

If you’re after more of a laid-back smooth and stylish retro feel to your 1950s night, be sure to check out Lisa Martin’s 1950s Swing Cabaret show ‘Lady of Swing’.