A James Bond show was the theme of the evening for the launch party of the new Hampton by Hilton Hotel in the Edinburgh West End.  I was delighted to be asked to perform my ‘Casino Royale’ show, which features a mixture of classic James Bond themes together with songs to suit a Vegas Casino theme night. 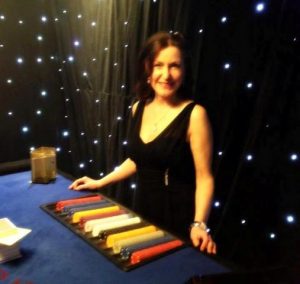 Trying my luck before the show!

The West End of Edinburgh is becoming a fantastic area for new businesses, with the Fountainbridge area boasting a huge range of attractions, including multiplex cinema, restaurants, bowling alley, casino, and even a trampoline park.

I discovered that Fountainbridge has something of a connection with James Bond, as Sean Connery was born here.  Prior to becoming the original iconic Bond he had a slightly less illustrious job here – as a milkman!

Hampton by Hilton prides itself on its friendly service, and I must say all the staff at the hotel were the friendliest I’ve ever encountered.  They were so cheerful, and really couldn’t do enough to help.  Paul and Lauren were in charge of the night and they made a fabulous team, making speeches, organising the raffle, and mingling with the crowd throughout the evening to ensure everything ran flawlessly.

The hotel restaurant had been magically transformed into a James Bond style Casino, with soft mood lighting and pictures of various Bond movies all around the walls.  The guests had fun at the casino tables, magician ‘Pop’ was on hand to keep everyone entertained, and I performed music throughout the evening to set the musical backdrop.

Here’s a snippet of the famous ‘James Bond’ music, plus my rendition of ‘Skyfall’ by Adele:

I also performed a mixture of easy-listening background music while the guests were sipping their martinis and trying their luck at the casino – here are some of the songs I performed:

Many thanks to Tracey at The Entertainment Company for organising the acts on the night as expertly as always.