Last weekend I nearly made it back onto English soil; travelling down to The Borders to perform my James Bond tribute show ‘Casino Royale’ at Berwick Holiday Park.  They put on a special ‘Best of British’ themed night for the owners’ party – so of course ‘Bond’ fitted the bill perfectly!

The team at Berwick did a great job in decorating the room in true British fashion, with plenty of bunting and balloons to add to the atmosphere.  The crowd were obviously up for a party and many had come in fancy dress (including one very inventive ‘postbox’ from Newcastle!) so I added into the set some uptempo pop songs from British favourites such as Emili Sande, Jessie J and Amy Winehouse to keep them on the dancefloor.

I was appearing with top Elton John Tribute Act Joel Coombes.  What a great performer this guy is!  He not only looks and sounds the part, but he is also a fantastic musician.  A true professional and a pleasure to work with, he really got the crowd going with all the popular Elton John classics such as I’m Still Standing, Rocket Man, and of course the classic Candle in the Wind. 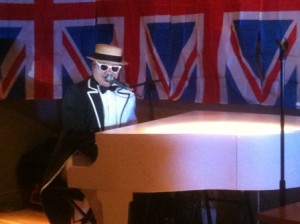