I’ve been performing my James Bond shows in Glasgow over the past couple of weekends, in some marvellous venues.

The first was for a fundraiser ball at Oran Mor, a stunning building right in the heart of Glasgow’s West End.

Oran Mor is a converted church, and this is evident in its beautiful architecture and unique setting, including the celestial ceiling mural by Alasdair Gray, which is one of Scotland’s largest pieces of public art. 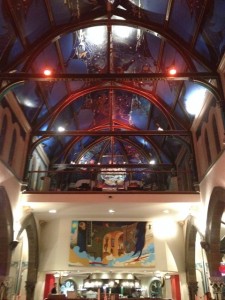 Top funk soul and disco band ‘Funk Nation’ were also on the bill, looking and sounding absolutely fantastic. Here they are in action (I got a bird’s eye view from the gallery!)

The evening was compered by Glaswegian comedian Alan Anderson, and we were also joined by the fabulous opera singer Lucy Kay, who you may remember from Britain’s Got Talent.

A big thank you goes out to resident Stage Technician Ross, and also to agents Freak Music .

My next James Bond show was at the very plush Grand Central Hotel, right in the middle of Glasgow.  This hotel can be accessed directly from Central Station, so I was able to travel to the gig by train, which made a nice change for me!

For this event I teamed up with Richard Knight, a wonderful tenor who specialises in Opera and West-End show songs, as well as James Bond themes.

Richard has to be one of the most hard-working acts I’ve ever worked with.  He managed to look cool, calm, and collected, and remained in true charming ‘007’ style throughout the evening, despite having spent all day travelling all the way from Bournemouth to Glasgow.  He kept the audience thoroughly entertained from start to finish with his fast-paced show, and didn’t rest until he had the whole crowd up on their feet singing and clapping.  What a star performer!

It was nice to hear some happy feedback from the clients too:

Just wanted to say a great big thank you to you both for a fantastic night.  I have feedback from other guests and people have said what fun they had – they loved your singing and the fact they could dance and sing along too.  Thank you once again and I hope we see you again soon.

Big thanks to agents Masquerade Productions.