The club was decorated beautifully with 1940s memorabilia and bunting to get everybody in the mood, and the club members had really gone to town with their cool vintage outfits – everyone looked fabulous.

When I arrived to perform my 1940s wartime show it really felt like I had been transported back to the 1940s as I looked around at a packed club full of land girls, officers, home guards, sailors and American GI’s. I even caught a glimpse of Adolf Hitler loitering at the bar! 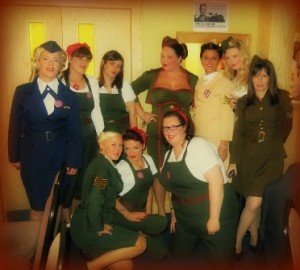 Belles of the ball

And I must say, I think it’s amazing how all those land girls ever got any farmwork done in their 6 inch stiletto heels 😉

A special mention must be made to our irrepressible trio of Andrews Sisters, who were good enough to join me in an impromptu performance of their hit ‘Don’t sit under the apple tree’ (although I’m not quite sure where their allegiance lay, as they were to be spotted later on carousing with some SS officers!) 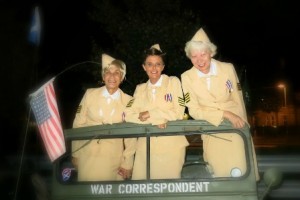 Everybody really got into the party mood, waving their flags and singing along to old favourites such as ‘Pack up your troubles in your old kit bag’ and ‘Bless em all’, plus of course the Vera Lynn classic ‘We’ll meet again’. 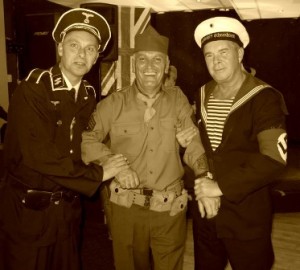 Captured by the enemy!

Rab the DJ from Chaplins Disco helped create just the right atmosphere with his friendly banter and great collection of 1940s themed party tunes, and of course he looked the part too in his wartime uniform.

It was a lovely surprise to see Anne Nelson and her team of ‘Jump ‘n’ Jive’ dancers turn up to entertain the crowd with their wonderful dancing. These guys are the friendliest group of people you could hope to meet, and their dancing brings a great retro feel to any occasion.

Want to learn how to dance like this?  Well you can!  Anne holds ‘Jump ‘n’ Jive’ dance classes (beginners / intermediate) around the Glasgow area on the following nights: 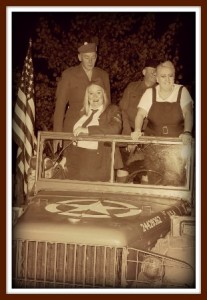 Yvonne and the troops at The BMC Club

A big thank you to Yvonne and the team at the BMC club for organising such a fantastic 1940s themed party night.  They thought of everything – even bringing out some delicious ‘stovies’ at half time.

It just goes to show that with a bit of imagination and some good organisational skills, clubs can still pull in a full house and have a really successful night, even in this day and age.