I had a busy weekend for last week’s Remembrance Day, performing my 1940s wartime show in Glasgow and Fife, Scotland.  It was a lovely sunny but briskly cold November weekend, and it was great to see such a large turnout for both events.

Remembrance Day, also known as Armistice Day, is a memorial day held every year on 11th November to commemorate the end of the First World War, when hostilities finally ended in 1918 at the eleventh hour of the eleventh day of the eleventh month.  It gives people the opportunity to honour the memory of the members of the Armed Forces who gave their lives in the line of duty.

My venue in Glasgow was the Kirkintilloch Rangers Supporters Club, a lovely friendly club with a really strong community spirit about it.  Everybody had turned out in force wearing their poppies with pride, and the band played a rousing selection of hymns and marches.

I sang my selection of old-time classics by Vera Lynn, Gracie Fields and many other wartime favourites, and it was great to hear everyone singing along.

At the end of the day a beautiful memorial bench was presented in honour of a local member of the community who had fought in the First World War.  What a beautiful gesture on a lovely occasion, and a privilege for me to be a part of.

On Remembrance Sunday I travelled across to Glenrothes in Fife to perform at the CISWO club.  Another fab club, CISWO host a broad selection of events for the local community to enjoy.  I was made very welcome by staff and customers alike, and enjoyed performing a wide range of music for the afternoon, beginning with my wartime show and ending with modern songs for dancing.

This will be my last opportunity to perform at this venue as they are moving next week to new premises across the road.  I wish them the best of luck, and look forward to returning to see the new club. 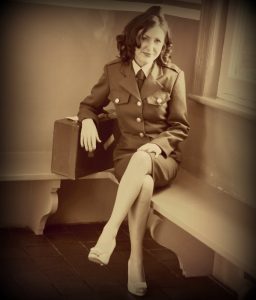 I recently visited the Corbridge Corstopitum Social Club in Northumberland to perform my wartime tribute show at their Battle of the Somme Centenery commemoration.

The Battle of the Somme represented a defining moment of the First World War, as it was the first major engagement in the history of the war, and caused a great deal of tragic loss and bloodshed.  2016 marks its centenary, so all across the UK there has been a big surge of interest in this historical period as people pay their respects to the brave soldiers who gave their lives.

It was a great pleasure to meet the lovely people at the Corstopitum Club.  They had made a big effort to transform the club into a cool vintage style, complete with sandbags, flags, and even ration tins of pickled onions.  There were some great outfits on show – one very glamorous lady in particular came up to me at the end of the night and announced that ‘she’ was really a he!

I love my wartime show as I have to admit the old songs from those days are among my very favourites.  Music from the First World War includes lots of cheerful sing-alongs – it’s easy to see why they needed cheering up, during such dark days.  I included ‘Bless em all’, ‘Pack up your troubles in your old kit bag’, and a few Al Jolson numbers that prompted many pairs of ‘jazz hands’ to start waving!

I received some lovely feedback posted on my Facebook page from audience members, such as:

‘The singer was amazing’

It’s great to know that everybody enjoyed themselves, and all for such a good cause.

Many thanks to Kate and her team for organising such a fabulous night, I’m looking forward to seeing everyone again soon 🙂

I recently paid a visit to Grange-Over-Sands where I was booked to perform my 1940s wartime tribute show at the Cumbria Grand Hotel.

The Cumbria Grand Hotel is a lovely old building which overlooks Morecambe Bay. I have great memories of this area as we used to go on holiday there to Pontins when I was little – ahh the exotic and glamorous vacations of my youth!

The Grand Ballroom at the Cumbria Grand is a very good size with an excellent dancefloor. I was reliably informed by one of the audience members (who was 83 and still cut a fine figure on the dancefloor!) that the floor was one of the best around for dancing as it ‘wasn’t sticky’.  Apparently a lot of places are reticent about having a slippery dancefloor these days due to the risk of anyone having a fall and claiming compensation.

The audience were up for dancing from the word go, so for my 2nd set I did my 1950s show, with plenty of rock and roll numbers for jiving to.  After the show it was nice to get a chance to go around and have a chat to the audience members to find out where everybody had come from.

There were groups who hailed from all around the UK, including London, Newcastle, Wales, and even some from near my hometown on the Wirral. It was nice to hear that familiar accent again, as I don’t get to hear it that much nowadays, having lived in Scotland for the past several years. 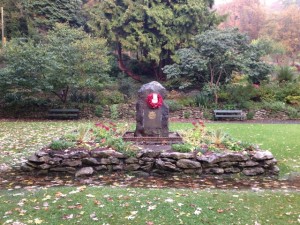 The next morning was a lovely day with lots of autumn leaves around, giving a real rustic look which seemed to really suit the hotel off to its best advantage.  I had a look around the area, stopping at the train station and the Normandy Veterans Association war memorial, which was set in a very peaceful and picturesque sunken garden.  According to the plaque, this area is thought to be the most historic place in Grange-Over-Sands, and it was certainly a charming place to visit on a sunny autumn morning. 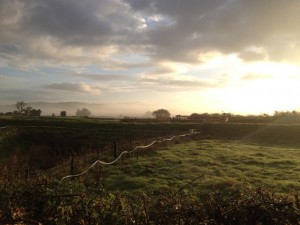 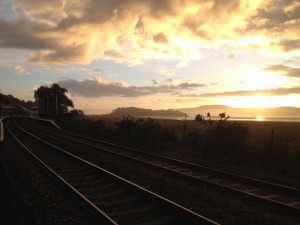 Cumbria really is a beautiful part of the UK, and the Cumbria Grand is well worth a visit, especially if you like dancing.